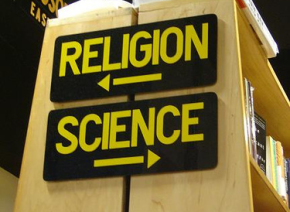 Bahá’ís believe that God is both the Author of revelation and the Creator of the reality which science investigates, and hence there can be no contradiction between the two.

The sacred writings of the Baha’i Faith indicate that our intelligence and reasoning powers are a gift from God:
“This gift giveth man the power to discern the truth in all things, leadeth him to that which is right, and helpeth him to discover the secrets of creation.” [1]

Science results from our systematic use of these God-given powers. The truths of science are thus discovered truths. The truths of prophetic religion are revealed truths, i.e., truths which God has shown to us without our having to discover them for ourselves.

Our sacred writings affirm that religion and science are, in fact, complementary:
“Religion and science are the two wings upon which man’s intelligence can soar into the heights, with which the human soul can progress. It is not possible to fly with one wing alone! Should a man try to fly with the wing of religion alone he would quickly fall into the quagmire of superstition, whilst on the other hand, with the wing of science alone he would also make no progress, but fall into the despairing slough of materialism.” [2]